Monday 19th October 2015, Western Australian Music or WAM held a Breakfast with Peter Garrett at the Duxton Hotel. This was to launch the long awaited autobiography called Big Blue Sky. The breakfast brought about Garrett talking about parts of his life in a question and answer format allowed for the audience to have more of an understanding of his music career, his environmental activism and is political career.

It was extremely interesting breakfast to have. Hearing Garrett speak about what Midnight Oil stood for and the political and social aspects that affected him; most of which he wrote about in his songs. Also to have band members who had very similar views and how this helped to create songs with the same meaning for all of them. As Garrett moved away from Midnight Oil, the public saw his activism towards the environment and his shift into politics, especially that of the Labor Party. It was particularly interesting to hear about all the work that he had done with the Labor Party that the public had not heard of. Policies and changes that he had started which had been taken over by another party member. To hear him speak about culture and the arts and how it was difficult at times, due to the backlash received as a result of being in Midnight Oil. This was often due to differences of opinion.

Garrett is a highly intelligent and speaks very articulately to his audience. It is captivating to listen to him speak, especially about the things that he is so passionate about. A truly inspiring man, one that makes me more passionate about wanting to make it into the music industry and be highly successful. He makes me excited to want to read his book, see what his life has been about and hopefully be able to take some of what he has done professionally and apply it to my own career… This is something I will keep you updated with in the future; when I have read the book and found things I want to apply to my career.

Definitely recommend seeing him speak next time he does a talk or function of some sought. 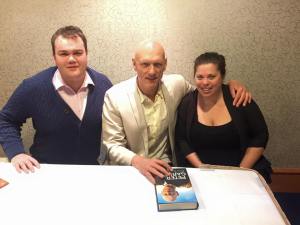